on April 01, 2018
Another year and another April Fools Day.  As always, a lot of different companies got into fun and posted some very creative promotions.  On one hand we got Razor pushing their new "Venom" drink which will disperse nanobots into you to make you play quicker and better. On the other hand we have the king of April Fools day shenanigans, Blizzard and World of Warcraft. 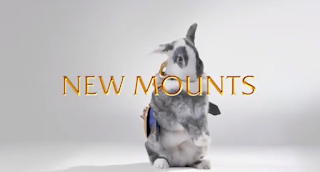 This year Blizzard has released 3 epic mounts. Usually players are accustom to having fancy dragons or armour covered horses to proudly ride around in Stormwind but Blizzard  has decided to go a more low key route with this announcement. Players will be treated to King Cluckcluck (chicken), Sir Buster Fluffybottom (rabbit), and Rex the Lapwarmer (wiener dog). As far as pet cosplay goes they nailed it, too bad it is not really coming to the game anytime soon. Check out the links to see the full videos.

For their new expansion Battle for Azeroth, Blizzard released new patch notes. You can read all of them in detail here, but the highlight of the new patch is the new game mode called Royale Battlegrounds. This is for all you Fortnite and PUBG fans as players will be dropped into a massive battle with 99 other unknown players (see what they did there). They posted that players will start each match with nothing and will need to hunt the map for weapons, talents and spells (that actually sounds fun). Players can earn special cosmetic items and character titles like, "Fort Knight" (ugh). Of course it will be released on iOS and Android phones.
Leave it to Blizzard to make the most of a fun day. Deep down I really want to see what they would do in a battle royale type game. Maybe one day. What have you see that made you smile? Post it below in the comments!