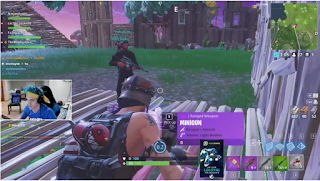 If everyone didn't already know Fortnite was a popular game they do now. Last night Twitch streamer Tyler "Ninja" Blevins blew up twitch and set a new record for the most viewers to one stream, with over 630,000 people watching. That is a huge number, and bigger then most towns in my area. It also smashes the old record of 380,000 viewers set by Dr. DisRespect when he returned to twitch.

This is a huge boon for Epic games and Fortnite. What better advertising can you get then to have 3 big names in music and sport play your game with one of the biggest streamers. It also opens up the game to a much bigger audience that may not be huge video game players but are big sport fans or music fans. Now they will look at this and say "well if JuJu plays it, maybe I should" and the ball starts rolling. Look at what happened when Kylie Jenner tweeted about snapchat, except this is having the opposite effect. That is the power of celebrity opinion, weather you agree or not, it happens.
Fortnite has released a new patch and game mode and with this, things are looking up for Epic Games and their little side project. If you want to see what all the fuss is about, click here.
Leave a comment, and follow me on twitter @nubbs_news.